What I'm Reading: The Help 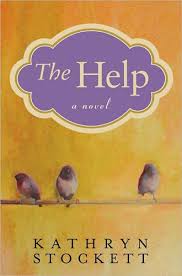 I had heard about The Help by Kathryn Stockett, how can I not have? This book has some of the best buzz I have seen in a long time. But when 5 separate patrons and 2 staff members told me I had to read it, I moved it to the top of the to-read pile. And, I am glad I did.

The Help is one of best novels I have read about the Civil Rights Era mostly because the ironies and contradictions of everyday life for blacks and whites is not sugar coated. Everything is laid out in plain language and the true life horrors of this part of our country's history are painfully exposed without excuses. If you are uncomfortable addressing our country's complicated history with race, do not read this book.

Stockett sets her novel in 1962 in Jackson, Mississippi. She gives the reader three narrators. Skeeter, a recent college graduate and aspiring writer. Skeeter is white and lives on an old plantation with her family. She has fond memories of the black maid who raised her, but has questions about her mysterious disappearance during Skeeter's last semester at Ole Miss.

Our other guides through the novel are two of the town's black maids: Aibileen and Minny. Aibileen is an older maid who works for one of Skeeter's friends and is a mentor and friend to Minny. Minny is younger, hot headed, and opinionated. She has been fired by Skeeter's best friend and is now working for a nice, but troubled woman who lives outside of town.

Skeeter is trying to start her writing career, and after talking to an editor in NY, tries to convince Aibileen and Minny to help her collect the stories of Jackson's maids. It is heart wrenching watching the lengths these three women and their contributors need to go to in order to work on this extremely subversive project. Along the way we are given access to an entire town of characters, the work of the Junior League, and the contradiction of a world where black maids raise the white children, but cannot even use the same bathroom them. It is a peek into a white ruled world about to be turned on its head.

I think this quote from the Washington Post says quite a bit about what a great job Stockett (a white woman) does with the African American narrators:

"Aibileen and Minny share the narration with Skeeter, and one of Stockett's accomplishments is reproducing African American vernacular and racy humor without resorting to stilted dialogue. She unsparingly delineates the conditions of black servitude a century after the Civil War."

I listened to the audio version of The Help and I would highly recommend it as long as you don't mind that there are three different women narrating depending on whose chapter it is.
Appeal: The Help is an uplifting and hopeful novel. Skeeter's desire to have a career and find love is a timeless tale. Her growth is realistic and inspiring; it mirrors Stockett's own personal story quite closely. All of the characters are nuanced and well developed. For example,the racist, alpha-female in town could be portrayed as all bad, but even as she is held out as the novel's villain, she is so much more than a stereotype.

Despite Stockett's emphasis on her characters, this is a fairly quick read. Two things propel the plot. First, our knowledge of what is coming next. We know the Civil Rights Movement is about to take a pivotal turn, and we know the people of Jackson will be caught in the middle of the struggle. The characters do not. We keep turning the pages to see, for example when Medgar Evers will be killed and how they will all react. Second, with each switch of the narrator, the reader is excited to see a new character's reaction to the novel's events. You want to take a break, but you cannot. I dare you to try.

There is no graphic violence or sex in this novel, but there are discussions of violence both racial and domestic. Life in 1962 Mississippi is relayed in a truthful manner. Some readers may be uncomfortable with the gross injustice and hypocrisy in this novel, but all of it is historically accurate.

The ending is fairly resolved, but extremely open. All three main characters end the book by beginning a new chapter in their lives, but where that new chapter will lead them is unclear. We know the road for each will not be easy, but it is implied that they will all end up the better for it.

Readalikes: For those who enjoyed the Civil Rights era story with a white girl learning from the strong black women around her, The Secret Life of Bees by Sue Mink Kidd is a great readalike. Both books were huge first novel blockbusters that tackle similar issues. The coming of age theme for the white girl is also big in both novels.

Other authors write novels about women who use what little freedom they have to subvert their oppressive systems. Lisa See's novels do just this as she looks at the historic lives of women in China. In Snow Flower and the Secret Fan the girls are at the mercy of tradition as they are forced to have their feet bound, marry who they are told, and move away from their families. They use their secret language to communicate and try to make life better for the next generation of women.

Others may be looking for books with a southern feel. For those readers I would suggest Fannie Flagg or Joshilyn Jackson.

Finally for fiction, although the setting here is in the early 1960s, I kept thinking about novels that tackled the issue of slavery and the intimate white/black relationship in the south during earlier times in our history. Two that popped into my head immediately were Sally Hemmings by Barbara Chase-Ribould and The March by E.L. Doctorow.

For nonfiction the Sweet Potato Queens series (it has now branched into fiction too) is like the modern (non-racist) version of the Junior League. Also books about Jackson, MS and The Civil Rights Movement (specifically, Eyes on the Prize) will be of interest to many readers.

I have a big backlog of books which I have finished and not written about, so look here for more reports soon.
Posted by Becky at 2:30 PM