What I'm Reading: All the Light We Cannot See 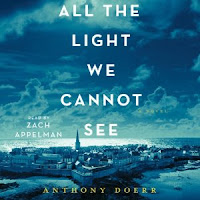 Many months ago I listened to All the Light We Cannot See by Anthony Doerr. I have book talked this one, particularly the brilliance of the audio, so much that I forgot that I hadn't written a review here on the blog yet. In fact, I only realized that I did not have a review when I went to list my favorite reads of 2015 and I couldn't find the review. That's because I never wrote it.

Before my soundbite review, I am going to use the publisher's plot summary. Why? Well it is not just to save time; I actually have a teaching moment planned here. It is to show you how a plot has nothing to do with why you love or book or not. So, summary:


Marie-Laure lives with her father in Paris near the Museum of Natural History, where he works as the master of its thousands of locks. When she is six, Marie-Laure goes blind and her father builds a perfect miniature of their neighborhood so she can memorize it by touch and navigate her way home. When she is 12, the Nazis occupy Paris and father and daughter flee to the walled citadel of Saint-Malo, where Marie-Laure’s reclusive great-uncle lives in a tall house by the sea. With them they carry what might be the museum’s most valuable and dangerous jewel.

In a mining town in Germany, the orphan Werner grows up with his younger sister, enchanted by a crude radio they find. Werner becomes an expert at building and fixing these crucial new instruments, a talent that wins him a place at a brutal academy for Hitler Youth, then a special assignment to track the resistance. More and more aware of the human cost of his intelligence, Werner travels through the heart of the war and, finally, into Saint-Malo, where his story and Marie-Laure’s converge.

So that is what happens, but that is not why people love this book. Here is my soundbite review which gets more to the heart of this novel's appeal


"This stunning, Pulitzer Prize winning historical novel tells the story of two children, on opposite sides of WWII. We follow each of them, one a blind, French girl who may be in possession of a rare jewel, and the other, a German, orphan boy with a talent for fixing radios, as they come of age during wartime.  Each gets their chance to narrate their separate story from their perspective, but as the novel moves forward, it becomes clear that their lives are meant to intersect. With memorable and authentic characters, lyrical but accessible language, a haunting tone, and a plot that carefully unwinds itself in a way that is suspenseful and compelling, this story will wrap you up and refuse to let you go."

That is the appeal hand sell highlights, but here is a little more.

First and foremost, this story is focused on the characters. Marie-Laure and Werner, yes, but there are many, many more. One of my favorites is Etienne, Marie-Laure's PTSD suffering uncle who offers her shelter in Saint-Malo. Even Marie-Laure's father, who is taken away by the Germans fairly early in the story is a presence throughout. His intricately carved model of Saint-Malo becomes vital to the story's final, heart pounding moments.

While this story does have intrigue due to the fact that the Germans are trying to find the one real jewel among many fakes and Marie-Laure may be the one with the real deal, readers who put plot first, will be disappointed. There are long stretches here where character development is the main goal of the narrative. Now it is not character development for no reason. Every detail we learn about the characters comes into play at some point in the plot; however, there are long stretches when "nothing happens." For a historical fiction story, set during wartime, well that may seem odd to some readers. In fact, the plot summary I shared above, makes the novel sound way more action-oriented than it truly is.

The language and tone are also beautiful in a haunting way. The tone is enhanced by Marie-Laure being blind and Werner living much of his life listening intently.  I also still remember a few descriptions from this book, namely the first time Marie-Laure went to the sea, and Werner's descriptions of surviving a bombing raid. The words that Doerr used have stayed with me.

Finally, the style. The story is mostly chronological but overall I describe it as stylistically interesting. I did not chose "complex" because while it is not straight forward, it is not hard to follow either. "Interesting" is my word because the multiple narrations mean the time line is a little fluid with some back and forth, but it also allows for compelling hints at how their lives will eventually overlap. Reading the book is like a small puzzle [which I know is on purpose due to some major plot points]; it is not hard to solve it, but it takes time and patience. And the unraveling toward a resolution is a large part of the enjoyment.

This is a book that is hard to forget after you have read it.

Note on the Audio: Look, there is not much to say here because Zach Appleman's narration has won all the awards. So instead of talking about how well he narrates it, here is why I think this book is improved as a story when it is listened to instead of read. Both story lines rely heavily on listening. The first is because Marie-Laure is blind. Obviously, she experiences everything without sight. When you listen to this novel recounting her life during WWII, you never forget that she is blind because in a way, you are too.  We both only have our ears to tell us the story. And then there is Werner, whose entire life is changed by hearing a science radio broadcast from France, so much so that he dedicates his life to radios and listening. It is what he is better at than anyone, it is what allows him to leave his mining town, it is what gets him into the war at a young age. When we listen to his story, we are more firmly placed in Werner's head than if we just read the words on the page.

Readalikes: By far the book that is most similar here in appeal, but not in plot at all, is Constellation of Vital Phenomenon by Anthony Marra.  Like All the Light We Cannot See, Marra's novel is impossible to forget after you have read it. Read my review because it explains why they are so similar and all of the readalikes there would also work here.

Marra's novel is a bit more contemporary, but if you want another historical fiction with multiple perspectives that is both haunting and compelling, try Mudbound by Hillary Jordan. It is also award winning, with a great audio.

Of course, some will be drawn to All the Light We Cannot See because it is set during WWII and that is a very popular frame.  You can click here for a crowd-sourced list of the "best" WWII books, but specifically for fans of All the Light We Cannot See, I would send you to Life After Life by Kate Atkinson or Suite Francaise by Irene Nemirovsky.  The titles link to my reviews for details, but in both of these we have the same haunting tone, amazingly authentic characters who drive the story, a compelling story line, and interesting styles.

Finally, All the Light We Cannot See was a finalist with Station Eleven in the 2015 Tournament of Books. Click through to see there final battle with commentary. I read Station Eleven last year and it made my 2014 best list also. Both novels are stylistically interesting with multiple narrators and a haunting tone.
Posted by Becky at 3:00 PM