It's Library Reads day and that means four things here on RA for All:
Also, the LibraryReads Board has also started another great book discovery and suggestion tool for you, a monthly What We're Reading column. This means there are even more library worker approved titles, new and old, for you to choose from.

So get out there and suggest a good read to someone today. I don’t care what list or resource you use to find the suggestion, just start suggesting books.

Also, please remember to click here for everything you need to know about how to participate. And click here to see a database of eligible diverse titles sorted by month. 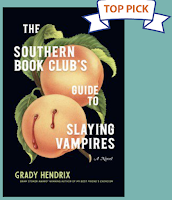 The Southern Book Club's Guide to Slaying Vampires
A Novel by Grady Hendrix
(Quirk Books)
"Hendrix's latest novel, possibly his darkest yet, addresses racism, sexism, and the mistaken belief that housewives are dull. Patricia and friends, all genteel Southerners, start a true crime book club. They have to apply what they've learned when a vampire moves into town. Patricia grows from a mildly dissatisfied homemaker to a vampire- fighting dynamo who thinks three steps ahead and takes ownership of her life. With perfect pacing, there's never a moment where readers can let their guard down. An excellent choice for horror fans of Joe Hill, David Wong, and Christopher Moore."
—Rosemary Kiladitis, Queens Public Library, Corona, NY
NoveList read-alike: The Stranger Beside Me by Ann Rule
And the rest of the list....
A Bad Day for Sunshine
A Novel
by Darynda Jones (St. Martin's Press)

“Jones follows up her Charley Davidson series in a spectacular fashion with a new series featuring police chief Sunshine Vicram. A fun, UN-PUT- DOWN-ABLE read with a large cast of lovable, diverse characters, several mysteries to solve, and laugh-out-loud humor. Perfect for fans of Janet Evanovich and J.A. Jance. ”


The Book of Longings
A Novel
by Sue Monk Kidd (Viking)

“Ana is Jesus’s wife and a force in her own right. Monk does not sensationalize her writing about a fictional marriage for Jesus, but rather goes into great historical detail and imagines what it would be like to be a woman in that time. If you have been waiting for a book like The Red Tent for the past 20 years, this is it. Give to fans of Anita Diamant and Marilynne Robinson.“

“Another fantastic, hard-to- put-down book by Wingate. The story moves back and forth from the post Civil War era where freed slaves are searching for lost family to the modern day South where a struggling new teacher is trying to engage her students. A must read for those who enjoyed Homegoing by Yaa Gyasi or On Agate Hill by Lee Smith.”


Chosen Ones
A Novel
by Veronica Roth
(Houghton Mifflin Harcourt)

“Some years back, five teens were picked, after they fulfilled a prophecy, to fight the Dark One. Now, on the tenth anniversary of that battle, they find out that the Dark One is still alive in a parallel universe. Do the young heroes have what it takes to fight him again? Packed with action, suspense, and breath-taking twists and turns. A good choice for fans of Lev Grossman and
N. K. Jemisin.”

“When a random guy sits at Katrina's cafe table, a nearby woman shares the exchange on social media with her own interpretation that soon goes viral. Katrina can't care less because she's been crushing on her bodyguard, Jas, for years. Now to save her from the media blitz, Jas needs to hide her away somewhere--maybe his house in Northern California? For fans of The Right Swipe and Christina Lauren.”


The Happy Ever After Playlistby Abby Jimenez (Forever)

"Sloan, still recovering from the sudden death of her fiance, finds a stray dog and brings him home. She calls the number on the tag but there is no response. Once she has fallen for the dog, the owner shows up and Sloan gets a second chance at love. For lovers of romantic comedies like Less by Sean Andrew Greer and Eligible by Curtis Sittenfeld."


He Started It
A Novel
by Samantha Downing
(Berkley)

"A funny, twisted, scary story about Beth, Eddie, and Portia, siblings who are required to recreate a fateful road trip in order to claim their inheritance. For readers who enjoyed The Kill Club and Eight Perfect Murders."

"This fast-paced thriller opens on the kidnapping of a young boy. More than a year after her son’s disappearance, Marin discovers her husband is having an affair and begins down a path of secrets and betrayal. For readers who enjoyed Lady in the Lake and Lock Every Door."


You Deserve Each Other
by Sarah Hogle
(G.P. Putnam's Sons)

"Naomi realizes she is only 18% in love with Nicholas, but doesn't want to be the one to break it off, so she devises a plan to force him to break up with her. For readers who liked The Wedding Party and Well Met."


Find out more at www.LibraryReads.org