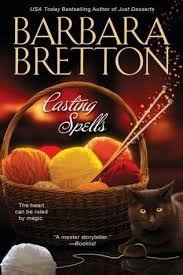 Supernatural elements are cropping up everywhere. Case in point, Barbara Bretton's charming knitting, chick lit series which begins with Casting Spells. Chloe Hobbs is the unofficial mayor of Sugar Maple, VT. She is the half human, half sorceress ancestor to the town's founder. Sugar Maple is a refuge for supernatural beings of all kinds. As long as a female descendant in the founder's line is still living in Sugar Maple, all of the witches, Fae, vampires, and pixies are safe; outsiders come to visit and see them as regular people. And the town makes a killing as a tourist destination.

Chloe runs the very popular knitting shop, but she so far, she has no powers. She is also pushing 30 and has not produced a female heir. The spell is weakening. Case in point, someone is murdered in the town limits. A handsome Boston cop is sent to help solve the case, and sparks literally fly.

Appeal: Casting Spells is part crafting cozy and part supernatural romance with a touch of mystery. It is romantic, but gentle. It is character centered, has a shifting point of view between the male and female protagonists, and has eccentric and compelling secondary characters. Casting Spells is fast paced with lots of action and humor. Many people love small town settings and Sugar Maple will satisfy those readers. It has a resolved ending, but the characters will still call you back for the sequel.

Readalikes: Casting Spells is for people who like the Sookie Stackhouse books in theory, but find them too violent in practice. It's Sookie lite.

A few other supernatural women's lives series that are similar to Casting Spells are The Demon Hunting Soccer Mom Series by Julie Kenner which begins with Carpe Demon and the Betsy Taylor Undead series by MaryJanice Davidson which begins with Undead and Unwed. But really anyone who enjoys any "chick lit" authors, and doesn't mind the supernatural aspects should try Bretton's well plotted and satisfying Chloe Hobbs series.

Casting Spells walks a fine line between chick lit and romance, so contemporary romance with a sense of humor like Susan Elizabeth Phillips is a good bet.

For nonfiction, I would try these knitting books and these about Vermont (which was a key appeal for me personally).
Posted by Becky at 9:04 PM