On Monday, our group tried something new-- we read a graphic novel.  For many of my "mature" ladies, this was a new experience, one that they were a bit nervous about.  But I am happy to say not only did we all survive, but also we had had a great discussion.

Yes, I led a book discussion on Fun Home by Alison Bechdel with a group of mostly senior citizen women.  It was a great experience and really tested my skills as a facilitator.  I often can coast when I lead the group, but making them move out of their comfort zone, pushed me to leave mine too.  In the end I think we all appreciated it.

For the record, I love this book.  It made my best of the year reads in the first year I did one of those posts.  I also read the sequel in 2012, Are You My Mother?, and although I did not like it as much as Fun Home, when you read the sequel, you learn quite a bit about what went into the creation of Fun Home.  That made me appreciate Fun Home even more when I re-read it last week.

But enough intro, let's get to the normal book discussion report format which begins with the publisher summary:


In this groundbreaking, bestselling graphic memoir, Alison Bechdel charts her fraught relationship with her late father. In her hands, personal history becomes a work of amazing subtlety and power, written with controlled force and enlivened with humor, rich literary allusion, and heartbreaking detail.

Distant and exacting, Bruce Bechdel was an English teacher and director of the town funeral home, which Alison and her family referred to as the "Fun Home." It was not until college that Alison, who had recently come out as a lesbian, discovered that her father was also gay. A few weeks after this revelation, he was dead, leaving a legacy of mystery for his daughter to resolve.

I have been asked recently why I always use the publisher's summary for my book discussion reports whereas in my reviews, I use my own words.  I do have a reason, and since I was asked, I will share the answer.  It is two-fold.  First, Kathy and I try to use the publisher's summary when we create our ballot for the groups to vote on the titles we will do for the 6 month planned period.  We do this so that we are not unconsciously swaying the vote by including an opinion, either our own or from a review.  I think it keeps the list more objective when it is presented for voting.  Stemming from that, second, I use the same words here so as not to color to insert too much of my opinion into these reports.  They are different from my What I Am Reading reviews.  Those are about my experience with a book.  These BPL Book Discussion reports are about the group, not me, so I use the publisher's description to emphasize that.

Now on to the discussion: 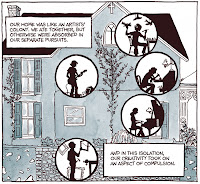 Readalikes:  Back when I first read Fun Home, I had readlaikes here.  And then last year when I read Bechdel's follow-up Are You My Mother?, I had more suggestions here, including The Glass Castle which is another memoir of a dysfunctional family that we also read in book club.

Two newer graphic novel memoirs that have a similar somber, raw truth, confessional tone that have also received intense critical acclaim are My Friend Dahmer by Derf Backderf and Stitches by David Small.  My Friend Dahmer is an interesting parallel because while Fun Home is all about Bechdel coming to terms with her possible role in father's death while Dahmer is the recollections of a childhood friend of the serial killer coming to terms with his own guilt.

Bechdel mentions the book And the Band Played On in Fun Home also. I would highly recommned this groupdbreaking work on the origins of the AIDS epidemic.


If you are looking for another critically acclaimed LGBT themed title, go to the Lambda Literary Foundation's website.  I personally really enjoy the work of David Leavitt. On NoveList, I wrote this about him and his style:


David Leavitt writes award-winning literary fiction, short stories, and nonfiction from the gay perspective. His empathetic characterizations make Leavitt's books popular with all audiences. Leavitt also edits collections by gay writers. He uses all his works to illustrate the daily difficulties of being gay in a dominantly homosexual world. Whether it is a fictional writer struggling to live openly, the biography of a brilliant mathematician, persecuted for his sexual orientation, or his own travels through Italy, Leavitt's work goes beyond the sensationalism of gay sex (although it is there), focusing more on the humanity of individuals and their relationships with the world. Start with: The Lost Language of Cranes (fiction) or The Man Who Knew Too Much: Alan Turing and the Invention of the Computer (nonfiction).

I think Leavitt and Bechdel have a similar feel, although it is important to note that some fans of Bechdel enjoy her work for its strong feminism, and they would not get this from Leavitt.
Posted by Becky at 11:39 AM