The Future of Epic Fantasy Explained by PW 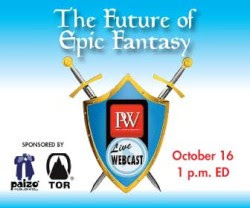 One of my 2013 Reading Resolutions was to concentrate on Epic Fantasy.  I pick a genre or subgenre each year to focus on.  To that end, this year I have already read Naomi Novik and have been researching George RR Martin readalike options.

But, I had not really done a serious analysis of Epic Fantasy as it has evolved since its inception 60 years ago with The Lord of the Rings.  That changed yesterday when I watched the archive of PW's Weekly Webcast for this week-- The Future of Epic Fantasy, hosted by Rose Fox.  It is free to view by clicking here.

First a comment on this webcast specifically.  There were 2 panelists, 1 an author and editor, the other an editor.  They were engaging and knowledgeable.  I cannot stress enough how useful this webcast was.  I will not rehash what was said because it is free and worth your time to listen for yourself. But I particularly liked when the panelists named the big authors you need to know about right now and discussed diversity in fantasy. I added a few books to my to-order cart for the library as a result of this webcast.

Also, if you hold out until the end when they took questions, they addressed the problem with there being too many long series.  They both felt you can write a self contained book in Epic Fantasy still.  In fact, I really liked when they talked about the idea of encouraging more series where each book is standalone but together they create a cumulative experience. This would be similar to how Romance series are.  Each book in a romance series is set in the same world but each book focuses on different characters.  Each book can be your first book.  I hope editors acquire more books like this in Fantasy.  I think it would make the genre more popular with general readers.

One of the reasons I have been focusing on Epic Fantasy this year is that we have a TON of Epic Fantasy readers at the BPL, but they rarely ask for help.  Seriously, they only come to the desk when they notice we are missing something.  On Wednesday I was helping one of those readers. He just needed help figuring out the order for an Ed Greenwood series and needed to put book 1 on hold. Ours was checked out.

But while I had him at the desk, I started asking him some questions about his reading habits. Yes, when they do stop to talk to me, I pounce on them. Sometimes, it has to be done people.

Throwing myself at Epic Fantasy fans serves 2 purposes.  1, I get useful information about areas where my knowledge is weak.  2, I let these fairly self sufficient Epic Fantasy readers know that we care about their reading needs and are there for them if they ever need us.

From this reader specifically, I found out that he is happy to just browse the shelves looking for authors he has heard of and trying their series.  He has no problem abandoning a series after book 1 if he didn't love it.  He personally prefers trilogies, but is okay with longer series. He also admitted to sometimes just pulling a book off the shelf because the cover was interesting.  He reads the blurbs and publisher provided summaries/info to decide if he will read it.  He does not want our help choosing his books, but is more than happy to talk about the authors and series he loves with us.

Now a comment on the PW weekly webcasts in general.  I do not listen to these enough.  They are excellent, and WEEKLY.  Click here for a full list of webcasts.  You can view them at anytime.  I am going to make an effort to participate in these more often.

I will be viewing these more regularly.  I suggest you at least take a look at what is offered also.  For what it's worth, the Epic Fantasy webcast ran without glitches in the background on my Mac Book Air while I got other work done.
Posted by Becky at 7:00 AM