I feel like I have inadvertently started an entire new feature on my blog.  Maybe, maybe not.  I started a new tag "conversation starter" just in case.

What do I mean by "conversation starter?"  I use it to refer to a passive RA techniques that can jump-start more RA interactions-- so passive techniques that lead into active interactions!  This is RA work functioning at its most efficient and effective level. You create an atmosphere that gets you and your patrons talking together about books and reading. 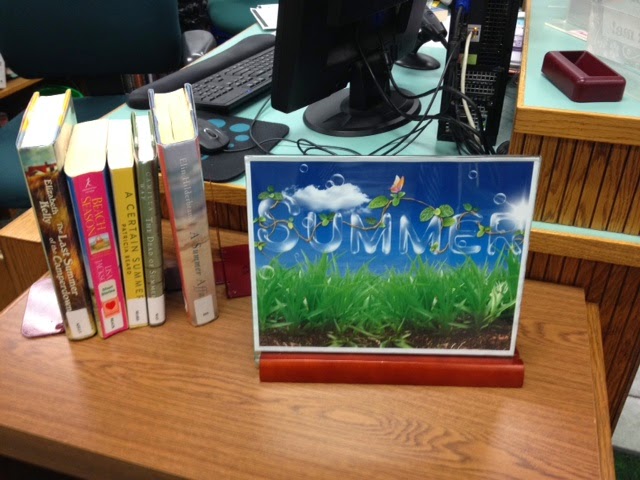 One of most popular conversation starters is the display that you see on the left.  It is right next to the RA desk. It is also placed in a way that every single person who goes to the circulation desk sees either coming or going.

But, all it is comprised of is a picture and some books, so why is it so effective? Three reasons.

The "Summer" display picture was taken on Monday, while the "Bird Fiction" picture below was taken this morning. Notice that we flip-flopped the books and the visual.  Also sometimes we use an object to inspire the display.  In the past we used a snake statue, and for this bird display, the feathers are attracting attention.  The 3D element adds interest.  We also allow people to touch the objects which we have found leads toward them touching the books. 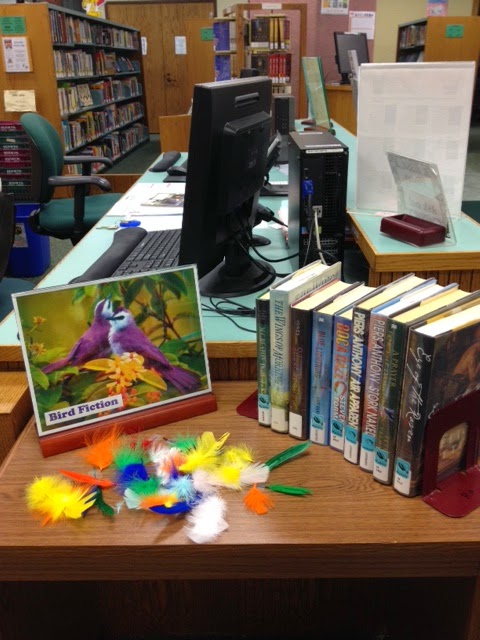 Let's explore why this works so well. While it is a combination of 1-3 that make it all happen, what gets people talking to us about the displays is the fact that we focus on being eye catching and changing it frequently.  That is what starts the conversations.

When signage is static people don't notice it.  It becomes part of the background.  But when something changes, your brain tells you to look at it again.  Over time what we have seen happening is that people stop to talk to us about the previous display.  They ask where it went? They ask how we decide what to do? They ask what is coming next?

The key is they are talking to us.  They are approaching the display, which is NEXT TO OUR DESK and engaging the person who happens to be in front of them in conversation.  We have staged this display so that person is a RA staff member. Once the conversation is started, we can ask about what they are reading, if they need a suggestions, etc....

Now this takes time.  It wasn't until we changed the small display regulrly that we started getting questions about it.  And I have to say, having the objects that people can touch has been a draw. [While I was typing this I had an entire family stop to feel the feathers.] 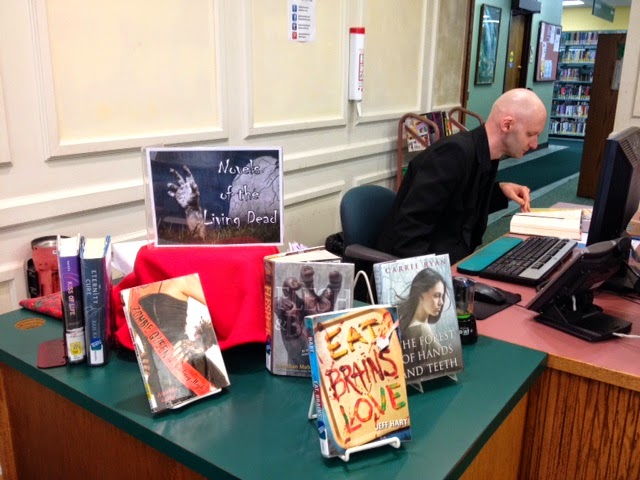 Also, we have one person, John, who is mostly in charge of this display.  You can see him here on the left in the picture of a similar display we have started at the Teen desk to similar success.  John comes up with the ideas for the adult display and is in charge of changing them; however, he is open to ideas from everyone.  Unlike our larger display cases, for which John has a schedule out months in advance and people assigned to each, this smaller conversation starting display is more spontaneous.  If one of us has an idea, he will move back his next planned set up and put ours in.

Try creating a conversation starter of your own near your desk, give it time, and see if your passive RA can lead to some active RA conversations.
Posted by Becky at 11:29 AM