This is Horror Awards and Bram Stoker Nominees

This is a cross post with RA for All: Horror because who else is going to report this news to librarians?!

Seriously though, I only double up on the posts when it is important information for both the librarians who do the horror collection development AND those who work with any and all leisure readers.

These are two main stream horror awards. These are titles that public libraries should own and promote to the appropriate readers.  This is an easy way to also stay up on what is most popular in the genre. In case you forget how, here is my post on using awards lists as an RA tool.

Specifically, I think every library should own the winners and the runners up in the Novel, Short Story Collection and Anthology collections on the This is Horror list below.  Without even double checking my holdings I know I own 4 of the six, and I have reviewed Bird Box and The New Black.  I just ordered the two short story collections I did not own a minute ago [yes, I took a break to go check].  And I should publicly say, shame on me for missing the Stephen Graham Jones title because Richard Thomas (winner below), told me himself that this collection was awesome!


This Is Horror Winners and Bram Stoker Nominees

Here is the link to the winners of the This is Horror Awards announced this morning, including Horror Novel of the Year and one of my favs of 2014 hands down, Bird Box.

I have also posted all of the winners below.

Yesterday, the final Ballot for the Bram Stoker Awards was also released. Hint, Bird Box is on there too [why haven't you read it yet?!?!]. Click through to see the full final ballot.

This Is Horror Awards 2014: Winners

Novel of the Year

You write because you love reading, and you write horror because you believe in the monsters, you believe in the imagination, you believe in the dark. I BELIEVE IN THE DARK. Maybe you start with poems, unrelated chunks, paragraphs. This may lead to short, freaky stories. Then you’re finally writing books and (holy cow) now you’re publishing books. And then you receive a notice that your book, your scary book, has won the best novel prize from a great website, a purity in the field. Nobody does it better than “This is Horror” and so not only is this a glorious chain of events for me, it’s also a magnificent HONOR. Thank you, This is Horror, and may I always maintain my end of the bargain, that when a reader reads a book of mine they will think, ‘THIS is horror.’

JOSH MALERMAN, AUTHOR OF BIRD BOX
THIS IS HORROR NOVEL OF THE YEAR 2014

Film of the Year

TV Series of the Year 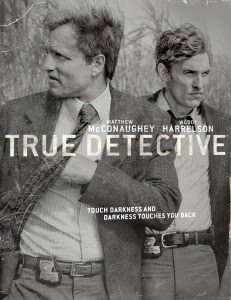 Short Story Collection of the Year

Winner: After the People Lights Have Gone Off by Stephen Graham Jones
Runner-up: The End in All Beginnings by John F.D. Taff

I feel like the Hamburglar: I tiptoed in theatrically behind all those other excellent collections and stole this one away. Thanks to Richard Thomas and Dark House Press for making After the People Lights Have Gone Off such a pretty book, and getting it out in the world, and thanks to all the editors and magazines and anthologies I wrote most of these stories for, and thanks to everybody who read and voted on it. And thanks to horror, for always being there each time I turn the lights off.

STEPHEN GRAHAM JONES, AUTHOR OF AFTER THE PEOPLE LIGHTS HAVE GONE OFF
THIS IS HORROR SHORT STORY COLLECTION OF THE YEAR 2014

Anthology of the Year

I know I can speak for Chuck Palahniuk and Dennis Widmyer when I say that we’re honored to win this award. It’s been a long journey from the original workshops and nominations, to the final selections, to putting this out into the world. Chuck says, “We return to troubling films and books because they don’t pander to us—their style and subject matter challenge, but to embrace them is to win something worth having for the rest of our lives,” and I couldn’t agree more. Medallion Press has been extremely supportive, as have the authors, some going on tour and reading with Chuck, the overall reaction from readers somewhere between thrilled and scarred for life. It’s really been a group effort, working with Dennis and Chuck, as well as all of the talented authors to bring this eclectic collection of transgressive stories out into the light. Medallion had this to say, as well: “It’s been a privilege to join Chuck Palahniuk, Richard Thomas, and Dennis Widmyer on their mission to bring the remarkable work of twenty authors to a wider audience, and we’re grateful to This Is Horror for honoring each of them with this award.”

RICHARD THOMAS, CO-EDITOR OF BURNT TONGUES
THIS IS HORROR ANTHOLOGY OF THE YEAR 2014

Publisher of the Year 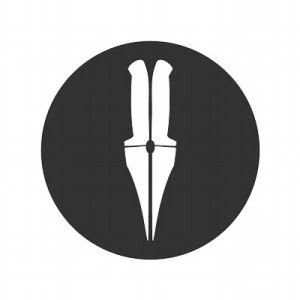 On behalf of all the editors, cover artists and of course authors, I would like to say a huge thank you for voting Severed Press Publisher of the Year 2014. To have all their hard work recognised this way means a great deal to us.

GARY LUCAS, SEVERED PRESS
THIS IS HORROR PUBLISHER OF THE YEAR 2014

Magazine of the Year

Wow, thank you so much! It’s quite an honor to be selected as ‘Magazine of the Year,’ especially amongst such stiff competition! Thanks so much too to all of the writers and editors who work on Nightmare with me–without them, of course, it wouldn’t exist.

JOHN JOSEPH ADAMS, EDITOR/PUBLISHER OF NIGHTMARE
THIS IS HORROR MAGAZINE OF THE YEAR 2014

UK Event of the Year

Book Cover of the Year

It’s an absolute thrill to win Best Book Cover of the Year. Thanks to the voters, This Is Horror, and to David James Keaton and the folks at Broken River Books for bringing me on board. You have all made this an incredible journey.

JOEL VOLLMER, COVER ARTIST FOR THE LAST PROJECTOR
THIS IS HORROR BOOK COVER OF THE YEAR 2014

Tattoo Artist of the Year 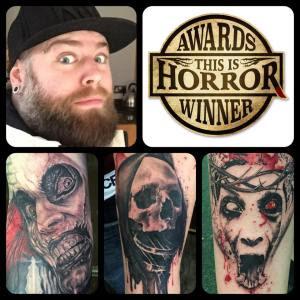 A huge thank you to all who voted and support me in doing what I love. Lots more sexy monsters coming your way soon.

OLLIE TYE, COSMIC MONSTERS
THIS IS HORROR TATTOO ARTIST OF THE YEAR 2014

Podcast of the Year 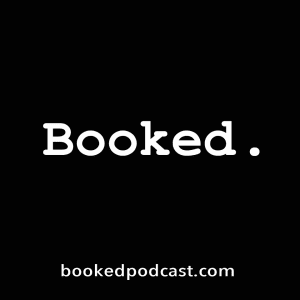 I’m ridiculously excited to be selected for this award again. Thanks to This Is Horror and to the listeners who voted for making this possible. Clearly, you have excellent taste and solid decision making skills. See ya next year!

LIVIUS NEDIN, CO-HOST OF BOOKED. PODCAST
THIS IS HORROR PODCAST OF THE YEAR 2014

I’m truly honored to be named the podcast of the year. Thanks to This is Horror and to everyone that voted. This award is the fire that I’ll hold to our feet when we get lazy. Here’s to another year of horror excellence!

ROBB OLSON, CO-HOST OF BOOKED. PODCAST
THIS IS HORROR PODCAST OF THE YEAR 2014
Posted by Becky at 8:06 AM

Email ThisBlogThis!Share to TwitterShare to FacebookShare to Pinterest
Labels: horror, literary awards, ra for all horror

All I can say is thank you so much for these great RA and Horror Blogs! I loved and continually push "Bird Box".
Congratulations Josh Malerman. Well deserved.