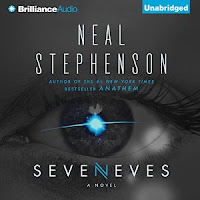 Over the summer I listened to Seveneves by Neal Stephenson and loved it! Here is my soundbite review:


“Did you love The Martian but wish it were 3x longer? Try Seveneves. One evening, for no apparent reason, the moon explodes. The consequences are dire. After a few years, the debris will cause a “hard rain” down on earth that will make it uninhabitable for 5,000 years. The only way to survive will be to send people up to space to wait it out. Broken up into 2 distinct halves, one set from the moment the moon explodes until he hard rain begins, and the second, picking up 5,000 years later, Seveneves is a sweeping, science fiction epic, but it is also a thought provoking look at human nature and evolution. You will be caught up in the intense drama, the well developed characters, and the fate of our planet and its inhabitants."

[Feel free to use this to book talk this novel to your patrons, just credit RA for All as helping you.]

That’s the very basic appeal. Now I will elaborate.

Let me tackle the 1,000 plus pages that make up this novel first. Yes this is a big book, but see my comments on the audio below and why I think listening to it is a great option. But despite the page count, this novel is very compelling. The entire first half is paced like a thriller because we have this time deadline until the hard rain begins. We are literally counting down to extinction. Yes there are small side stories that are science heavy and detailed oriented which move a bit slower, but they serve two purposes. First, they are small breaks in the intense drama when I could stop and catch my breath. And second, they are necessary to make the plot believable, flesh out the characters, and foreshadow things that will come in part 2.  I am not a big science person, but Stephenson explained enough that I got the gist of “how” humans were able to adapt to living in space indefinitely.

The second half of the story moves a bit slower because we are in a situation that is unimaginable-- returning to Earth 5,000 years later. There is a lot more description here, but I was so interested in knowing what had happened over the 5,000 years and what would happen next that I was riveted.

Character is key to the enjoyment of Seveneves. As the title hints at, there are 7 literal “Eves,” women who keep the human race alive. These strong women drive the plot, but there are other characters throughout who take turns with the pov and whose interaction and decisions are key. This novel is a great example of a story that has plenty of action, but in truth it is driven by it’s characters. Stephenson carefully and skillfully builds each character until you feel like they are living beside you in the real world. And since, ultimately, this novel is about the human race, every character is important.

Like all well executed since fiction, there is a huge world building element that readers of the genre will expect and enjoy.  But also, science fiction is about ideas of today, they are just extrapolated into a currently impossible [but not scientifically improbable] setting. In this case, Stephenson is forcing us to confront how we take our environment for granted AND he speculates on human evolution [fascinating].

Despite it’s length, I wished Seveneves was longer.  We are left at the new beginning on Earth. It is a closed ending; we know about how and if mankind survived, but not what happens as everyone returns to the Earth’s surface.  I hope someday Stephenson returns to tell us what happens next.

Notes on Audio: The first part of the novel is narrated by a woman, while the second half (5,000 years later) is narrated by a man. I did not have a problem with either narrator because the story and the characters were so riveting; however, I have read a few negative comments on the narration.  I did love two specific things about listening to this book:
A final note on the audio-- I read somewhere that the printed book has some useful illustrations. The audio does not, obviously, but I did not feel like I was missing anything.

Readalikes: As I said above, this is the book for those of you who loved The Martian but wish it were 3x longer. But the amazing thing about this novel is how many entry points there are for someone to enjoy this story. You have to be okay with the fact that there is a bunch of science here, but you do not need to be a hard core SF fan to like it.

You do, however, need to be a fan of complex stories, strong world building where the setting and its details are extremely important, and you have to care about character, how characters interact, and how character can drive the story.

Kim Stanley Robinson is a great example of this in science fiction.  Anything by him is a good choice here, but in particular I would suggest the older Three Californias Trilogy or the brand new Aurora.

But the epic historical fiction of Edward Rutherfurd and/or Ken Follett  would also work for readers who want to follow people, over many generations and do not need to have the SF elements to be happy.
Posted by Becky at 3:57 PM