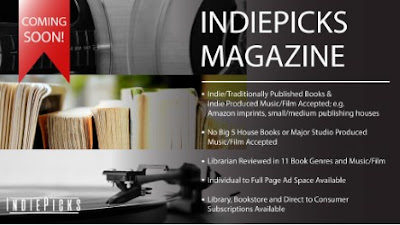 Let’s start with the announcement and then get into how it will effect me and all of you!


In a literary world dominated by the Big Five publishers, IndiePicks Magazine launches this fall as a review source that focuses solely on the talent and works of indie imprints, small/medium press, and non-traditionally published authors. The magazine will highlight books, non-major studio film and music—all reviewed by librarians, for librarians. Rebecca Vnuk, formerly of Booklist and a respected readers' advisory librarian herself, will take the helm as Editor in Chief. She can be reached at rebecca.vnuk@patomimediagroup.com. The first issue of IndiePicks is slated to publish in November 2017 and will be aimed at both library selection staff and at general readers. Please check out their Facebook page (https://www.facebook.com/indiepicksmag/), and sign up at the website for notification of the official launch!  http://indiepicksmag.com/


This magazine is going to be a game changer for libraries in many ways and not just because I will be writing for it.

One of the biggest problems libraries are facing right now in terms of collection development is the fact that the Big Five dominate the publishing market and therefore the review space.

As we all know [but surprisingly most authors do not know], most libraries require that a book have at least 1 review from an “official” source in order for it to be added to their library’s collection. People like me and Robin Bradford [among others] argue publicly that it is time for this rule to change if want our collections to truly reflect the best of what is being published today- especially in terms of diverse titles and genre representation. This rule is why I try to mention as many small press horror books as I can in my columns and on the horror blog so that you can at least have some kind of argument for adding them to your collections. It has helped some of you add independent horror, but for others, you still need that official review.

My travels throughout the country have shown me that for many libraries, this rule is not going to budge any time soon. Most public libraries are small, single branch operations where they can barely keep up with the Big Five books let alone have time to seek out reviews of independent books on their own, no matter how good these titles may be.

But, a library collection focused magazine which will hand deliver these independent titles to you just like our other trusted review spruces do for the larger publishers, this, just about any library worker, anywhere in America can easily add to their repertoire.

It is the same format we are used to but with content we cannot get anywhere else. And, Rebecca has already assembled a superstar team of reviewers with a demonstrated commitment to promoting independent publishing including me, Robin Bradford and Kaite Stover among others. There are experts already lined up to help you help readers.

Recently I had a series of vague Tweets about my plan to take over the book world. That plan had involved getting all of the writers associations from the different genres united to promote their small press authors to libraries directly because I was so done with the major publishers ignoring genre titles and their readers. But then Rebecca told me about this new venture, and I put those plans on hold, instead directing my writers association contacts directly to Indie Picks. This magazine will do so much more to reach every library than I could have done alone. My plan was a start, Indie Picks could be the solution.

I cannot wait to see how Indie Picks makes our library collections better by allowing us to add titles that are more representative of what our patrons actually want to read regardless of who published the title. I am also excited for the implications this magazine will have as a RA tool- a topic I will explore in detail after we have a few issues under our belts.

So go to http://indiepicksmag.com/ right now and sign up for notification about the first issue. This is going to become one of your favorite RA and Collection Development Tools. And I can say that with confidence because I trust Rebecca AND I will make sure of it in the content I provide.
Posted by Becky at 10:20 AM

A book and a review said...

It is very hard to have me speechless and you have done it. Thank you for your WONDERFUL post on our magazine. That Rebecca has signed on as our Editor in Chief still has us pinching ourselves. Not to mention, we are SO excited to have you join us as a columnist for IndiePicks. Rebecca has brought together such a dynamic team of LIBRARIAN reviewers (after all who knows books more?) that we know this will be a reputable source for indie produced works to library purchasers and the patrons served.

I am beyond happy to be associated with you. Excited to begin.

This is great! It would be super helpful if reviews included info on physical attractiveness - does the cover look professional, is the text laid out well, does the book have the title on the spine, etc. Basically, does it look good enough that a customer would grab it from the shelf? This info is usually lacking in other reviews of indies (kirkus and foreword, for example) and we've been burned before by books that get great reviews for the story but end up looking pretty shabby. They don't circulate.

This information is extremely helpful to authors like me who have been published by small houses. Thanks for this post and for IndiePicks.

I'm one of the authors who while realizing and even coveting the honor of being part of a library's fiction collection, I didn't realize to be considered required at least one review from an "official" source. If I was thrilled to hear of plans for IndiePicks Magazine before, knowing this only makes its mission more imperative. Thank you so much to all of you who are working to bring this valuable resource to the book world!