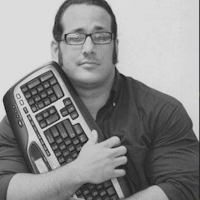 I first got to know Gabino Iglesias through his essays and book reviews on Lit Reactor. Iglesias is a prolific writer and reviewer for a variety of major media outlets [keep reading for more links]. I knew about his critically acclaimed debut novel, Zero Saints, but I really interacted with his work as a fellow book reviewer reading his nonfiction and following him on Twitter.

And then, last February, I read his contribution to Clicker Forever: A Tribute to JF Gonzales entitled, "Garcias, Hermano: A Letter to a Man I Never Met" and it made me cry. I gave the entire collection a star review in Booklist Magazine, and Iglesias' entry I will never forget.

You can read a tangential piece, "Collaborating with a Dead Hero" on LitReactor here.

I now race to get my hands on everything he writes-- fiction, nonfiction, book reviews, essays....everything.

So today, I am going to let Iglesias, a man who writes about marginalized voices frequently, an author of brilliant fiction and nonfiction, and a human who fights for all to humans to be treated with dignity, I am going to let him tell you about what it is truly like to be a writer of color in America. And as you read his essay, please remember, this is a successful, well educated, critically acclaimed writer of color. Someone who has the platform to speak from NPR, the LA Times, LitReactor, and other major media outlets. Then imagine everyone else, those without a way to defend themselves or speak out.

That's where we come in, at the public library. I will not take anyone's excuses that their community doesn't want or need diverse collections. I stood up to a powerful librarian from a notoriously racist suburb at my state library conference 10 days ago and challenged her in front of her peers when she said that I couldn't "require diverse collections to her community because they don't want them." I did not back down and she grudgingly admitted I was correct.

Everyone needs a collection that reflects the world we live in because all kinds of people live everywhere AND we all need to understand the perspectives of the people that make up our world, and last time I checked, the world is more "brown" [to borrow the word from Iglesias] than "white."

Today, I asked Iglesias to show us all a small slice of the life of an author of color- on both blogs. And then tomorrow, on the horror blog, he will answer some questions about horror specifically, tell you about his books, and even suggest some of his personal favorites.

I would like to thank Iglesias for being open and honest with my readers. I have added some links to his piece below if you want to check out more about him.

Let me give you an idea of what it’s like to be a writer of color in this country. It won’t be a thing about my past or a long recount of my plethora of negative experiences. Instead, I’ll keep it short and recent. A single day: October 20, 2018.

At 6:00am I got to the gym. A few minutes later, a man on his way out was having a loud conversation on his cell phone. He suddenly switched to an Indian accent and laughed before pushing the door and walking out into the dark. I wished he hadn’t. I wished he had stuck around so I could give him a lesson in civility. A few minutes later, I pulled out my phone and Tweeted: “Remember: making fun of someone’s accent makes you trash. If you do it in front of me/to me, I’m coming for you. Also, you have an accent. Move a few states, change coasts or travel a bit and you’ll notice. Happy Saturday.”

The guy on the phone soured my mood, but at 7:00am I received an email notification that my review of Jeff Jackson’s Destroy All Monsters was up at NPR. I’ve been a professional book reviewer for a decade, but talking about books in great venues hasn’t lost its appeal, so my mood soared back up. I was able to ride that high for hours. That’s how happy books and shining a light on the work of outstanding authors makes me.

At 4:00pm I took a stack of books I won’t read and some I received in the mail twice and went to a local used book store. I stood in line behind a white man at the selling counter. They asked him if he had sold with them before, took his license, asked him if he went by Paul, and told him they’d call him in a few minutes with an offer. Then I stepped up to the counter and the following conversation took place:

Counter guy: "You sold with us before?"

Me, giving him my license: "Yeah."

Counter guy, looking at the stack: "So you...acquired these legally?"

I didn't yell or drag him over the counter to knock his teeth down his throat. I didn't ask to talk to his manager. I didn’t say “I probably read more books in a month than you read in a year.” I didn’t say I get a ridiculous number of books delivered to my front door every month. Instead, I looked at him in a way that clearly communicated one more racist comment and he would definitely fly over that counter. He looked at his shoes and asked me how I pronounced my name. I slowly said “Gabino” instead of “In the immortal words of Roxane Gay, it’s Dr. Iglesias to you, motherfucker.”

I’m used to those comments. I’m used to the looks. I’m used to people running away from me when we step off the bus at the same time. I’m used to being followed around whenever I step into a store. I have developed coping mechanisms to navigate life without letting stuff like that ruin my blood pressure. Unfortunately, that nonsense seeps into my writing career. Being a writer of color is different from being a white writer. Let me give you a mixed bag of facts and invitations:
1. Every 1-star review of my previous novel, ZERO SAINTS, includes a complaint about the amount of Spanish in the narrative. There’s also Russian and Yoruba in there, but no one has ever complained about those.

3. I write primarily horror and crime. I invite you to go make a list of all the Latin@s who have won the Bram Stoker or an Anthony Award. When you’re done (trust me, it won’t take long!), go check out the best-sellers lists right now. The term whiteout comes to mind, doesn’t it?

In any case, for folks like me, writing is act of resistance. After folks complained about the Spanish and Spanglish in ZERO SAINTS (a novel that was praised by Jerry Stahl, optioned for film, nominated to the Wonderland Book Award, translated into Spanish and published in Spain, and praised in places like the Los Angeles Review of Books), I decided to double down, to stay true to my voice, to make barrio noir a thing, and to anger as many racists as possible in the process while saying something with my scary stories.

Now let me tell you about the end of my day. A racist read that tweet about making fun of accents. At around 8:00pm he decided to call me a beaner on Twitter. Twice. Beaner and spic are things I’ve been called on Twitter a few times over the past year. I don’t let that get to me. Let them call me names as I continue to hustle, to write and publish, to review great authors, and to support indie lit, LGBTQ writers, fellow writers of color, Appalachian writers, and work in translation.

As a horror writer, my job is to scare and entertain, but I decided long ago to do that within the context of my identity and while saying something about race and authenticity with my writing. My job is to support and amplify marginalized voices with my platform and my nonfiction. My job is to minimize experiences like my own for others and to battle racism wherever and whenever it pops up. My job is to strategically dismantle the system from the inside so that I never again have to sit on a diversity panel where half the panelists have absolutely no reason to be there but there weren’t enough authors of color invited/present to fill said panel. My job is to give readers blood and pain and death and mayhem but in a way that makes me happy and aligns with my life and experiences. My job is to tell the tales of my side of the world. My job is to push with all I have until we have women and people of color getting published as often as they should and until there is a bit of Otherness in those best-sellers lists. The time is now. I’m not alone. COYOTE SONGS, my next novel, will be published on October 31st. It’s full of horror and violence and multiculturalism and syncretism and Spanglish. I’m ready for the backlash. I’m ready to keep fighting. The thing about marginalized voices is this: you can try to ostracize us, but we will push back harder than you thought possible.
Posted by Becky at 9:42 AM

we who might be born white (Italian Irish me) have no real comeback or a personal apology for ever not being more aware of all this will have to do. Now that said...I may not read as many books as you do, Gabino, but I read a hell of a lot..over 100+ books this year, and the year ain't over yet. How Carlos Ruiz Zafon did not win any major lit awards, I offer here..and how Zero Saints ( a book far better than the 9 the same old white guys published same time) is just a testament to the real racist nature and mind set of this land. You just keep hustle and do what you do, you know who your on line (gang) is and we got your back....till the end of time

Gabino Iglesias is one of the most interesting writers and personalities in the country right now. Seriously.