This week the ARRT Steering Committee is finalizing our final draft of the 5th Edition of the Popular Fiction List, a product we sell to NoveList. This has been two years in the making.

I will have more to say about how you can best use this resource for staff training and self-evaluation and about the changes we have made overall when we get closer to its release [November 14th], but today I wanted to chat a little bit about the section for which I was the "team captain"-- Speculative Fiction.

[Insert sarcastic shouts of "Shocking!" here. What did you expect. Seriously, I am nothing if not always on brand people.]

As the captain of the Speculative section, I was tasked with leading our team through the landscape of Science Fiction, Fantasy, and Horror, making sure that we not only gathered a diverse and inclusive list of authors, but placed them in the subgenre they most fit into.

Sounds easy on paper, but if you know anything about the speculative genres, you know this was a difficult task because they all have a tendency to blend within books and authors often write in more than one. In fact, just revising the cumbersome genre-subgenre classification within Science Fiction and Fantasy was difficult enough, but then, the bigger issue. We were left with a large number of authors who clearly write "Speculative" but who could not be fit accurately into any one genre, they belonged to all three, with every single one their books they belonged to all three.

Now, this will make more sense when you see the final product, but stay with me here as I use a mainstream example, an author who HAD to be included somewhere, Jeff Vandermeer.

What genre does VanderMeer write in? There are arguments to put him in Science Fiction or Fantasy or Horror. Also, one of the things we consider with all of the speculative authors, because many actually write in both SF and Fantasy regularly, is how readers categorize them. In other words, in which genre would most readers place the author overall.

Well, with VanderMeer the answer is all three. How do I know that? One of the best ways to see how readers categorize an author is to see which "shelves" readers put a book on in Goodreads. 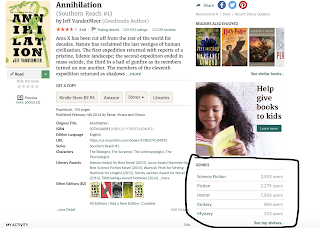 To the left is a screen shot for one of his most popular books, Annihilation.

As you can see, I circled the most popular shelves that people put this book on and Science Fiction, Fantasy, and Horror are all in the top 5.

I always label VanderMeer as one of the benchmark authors in "Weird Fiction" myself, but the Speculative section didn't have "Weird Fiction" before. And more importantly, as the person who could change that by adding it, where would I put it? Under which main genre, Science Fiction, Fantasy, or Horror?

All of this is the long intro to announce that I took my job as captain of Speculative Fiction as a chance to blow up the entire structure as you can see in the new scope note for the revised section [bold added by me for the blog today]:

Speculative Fiction: Speculative fiction explores the wide world of “what if.” The appeal for readers is in the otherworldly quality of the stories. They like to follow the characters into a setting where the impossible is possible. The intricate world-building in these novels often means the elaborate settings are used in long-running series. In speculative fiction the “what-if” could arise by magic, science that is not yet possible, a supernatural monster, or anything else the author can dream up. The speculative genres and the authors who write them also have a tendency to overlap and blend with each other; however, most readers of these genres both understand and expect this. Fans crave stories which ask them to look at their current world from a different perspective. The speculative fiction genres include: Science Fiction, Fantasy, Horror and Further Explorations of the Unreal.

Yup, I added an entire new "genre" that isn't a genre...."Further Explorations of the Unreal." I mean, you figured they knew what they were doing by putting me charge of anything, right? Chances were I was going to do something crazy.

Seriously though, when we really broke down the issue as a group, it went beyond shoe horning "weird fiction" in somewhere. There were still other categories and authors that needed consideration. And, we were also finding that almost all of the authors we were struggling to fit into the old categories were the, popular, one voices authors we were trying to make sure we included.

So today, I present a preview of some of our work, as I give you the scope note for this new category under Speculative and the three new "subgenres" with their scope notes, all created, from scratch, by my group for ARRT.

All of these categories have authors assigned to them, but you need to have access to NoveList later this year or become an ARRT member in order to see those. I have given 1 example author for each category to help you orient yourself though.

Even without all of the authors, I know many of you can use this to help readers right now.

FURTHER EXPLORATIONS OF THE UNREAL: The genres encompassed by the Speculative Fiction umbrella have always overlapped, but one of the three main genres has taken a leading role. Over time, genre blending has resulted in the emergence of distinct subgenres which are hybrids of the larger speculative genres. Readers of these blended speculative subgenres enjoy stories where the unreal can come from a mixture of magic, horrific creatures, and science and are interested in the space where they all can work together. Authors of these hybrid subgenres must work twice as hard as their binary cousins to build their worlds, making sure that readers feel confident that the rules are consistent within the two [or more] frameworks they have created.

I like these definitions so much better than the term "genre-bending." The latter doesn't help booksellers or librarian file books.