Please see yesterday's post of the introduction. I saved the buzzier and better known titles from the July 2021 issue for their own post so that they did not overshadow the excellent options from lesser known writers.

These are both books you should have preordered, but just in case, fix that now. Both will have HUGE appeal to a wide range of readers, both were as close as I get to giving a star without giving one, and you have everything you need to book talk these titles to readers in this post. 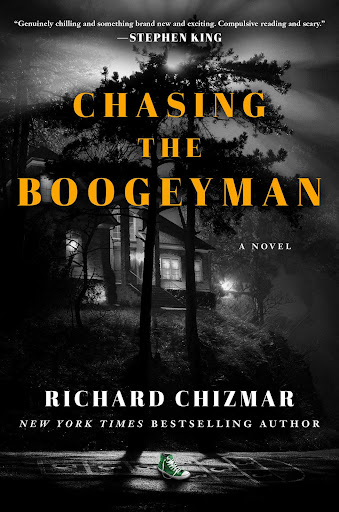 Best-selling horror author, Chizmar, takes creepy to a whole new level with this “True Crime” novel, set in the summer of 1988, in the small town where Chizmar grew up, during the months between his graduation from college and his January wedding, as teenage girls are abducted and murdered. As an aspiring writer, Chizmar begins documenting the reign of terror. Every detail about Chizmar, his life, his inner struggle moving from childhood into manhood, marriage, and a career, all of it is 100% real, but the murders, their details, the newspaper reports, and even the photos, none of it happened. Framed as the reprint of a forgotten publication from 1990, with a 2019 update, the volume is a solid example of True Crime, mixing background detail with action, suspense, and a compelling pace. However, as metafiction, it excels. Its palpable proximity to reality adds an unshakable level of unease. With less narrative restraint this book becomes a caricature of itself; however, Chizmar injects just the right amount of self reflection to forge an undeniable, and ironically honest, emotional connection with the reader. The result is strikingly original, a story that will thrill fans of intimately investigated nonfiction like I’ll Be Gone in the Dark by McNamara, and self aware, psychological suspense like My Sister, the Serial Killer by Braithwaite.

YA: Chasing the Boogeyman has the same fictional True Crime frame as the wildly popular YA novel, Sadie by Summers, but the strong coming- of-age and coming to terms with leaving home for good themes will also appeal to many older teens.

Further Appeal: People throw around the word original a lot, but this lives up to it. This novel is literally the biography of Chizmar, hiss life, family, and his founding of Cemetery Dance, and yet is also a fictional crime story at the same time. And, the story is a winner as both "true crime" and a thriller fiction novel. This is not an easy set to pull off.

It is also meta-fiction to the extreme. One of the BEST parts of the book are the photos of the victims and crime scenes. Now remember, these photos were staged, the pictures are of friends from that era who are still alive. Everything here is so creepy because it is so real and yet it also isn't.

It is also an exploration of a coming of age, both as a man and a writer and publisher. The monsters
that defined his own journey from kid to man, shattering his innocence but also propelling him to become the author and publisher he is today, those are manifested as a serial killer. But again, placed into his real biography. And NONE of the horror actually happened. Talk about unsettling. You are on edge every moment of reading this because as you pull back to remind yourself it isn't true you are uncomfortable
with the fact that it feels real. Are you sure? You double check. I found myself doing searches just to be sure.

His writing is so engrossing. Everything Chizmar writes draws the reader in easily. Click here for other books of his that I have reviewed. While the stories can all be different, his engaging and intimate narrative voice, whether the POV is first person, third person, or even found footage, is a unifying appeal that cannot be overlooked when helping readers. If they like one Chizmar book, they will like all of them.
My only complaint with the entire book, the only reason it is not a star, I was uncomfortable with the way the female investigative lead was described physically in relation to her looks [dumpy, not attractive, etc...] as much as her brain. Now, that being said, I think Chizmar did this on purpose to show young Chizmar's "green-ness" as a writer. The whole book is supposed to be the first thing he every wrote. It is acknowledged to have issues. But my problem is Chizmar was too good at this and the subtlety of things he inserted probably on purpose, it's too subtle. I realize that really isn't a criticism, but it is why I didn't do a star.

Readalikes: I gave you three above. Any true crime where the author involves themselves and their life story into the investigation will work. But there is also that second layer here, the unsettling nature of how real it feels juxtaposed with the knowledge that it is fake. It's the dread from the realism that is not real which is extremely appealing here. Gillian Flynn and Sarah Pinborough capture this appeal well. If I had to pick one by each I would do with this review of Dark Places [fake True Crime frame] by Flynn and Cross Her Heart by Pinborough.

But again, all of this should prove to you how WIDE the appeal of this novel is.

Opening with a very creepy Rebecca vibe and set in a fictional world reminiscent of post WWII Europe, Starling introduces the very practical Jane as she proposes a business arrangement marriage to the local doctor, Augustine Lawrence, a brilliant and kind man, but an outsider who keeps to himself. Dr. Lawrence’s only rule for their marriage is that Jane sleeps at the office, his home in town, while he must return to the crumbling family manor home on the outskirts of town each evening. After a storm forces Jane to break this agreement on the very first night, what began as an uneasy story steadily builds to unrelenting tension, further enhanced by Jane’s intense first person narration. The reader is compelled to follow Jane as she discovers the truth at the manor home, unravels her husband’s lies, and battles horrors, be they real or imagined, but they will also thoroughly enjoy falling in this immersive and unsettling journey. A perfect choice for readers who enjoy how today’s writers are playing with the well trod Gothic trope to create something wholly new, utterly terrifying, and supremely satisfying such as Mexican Gothic by Moreno-Garcia or Now You’re One of Us by Nonami.

Further Appeal: First things first, shaking off that ominous title is impossible and I loved it. From that unsettling start, it all builds. And I am happy to report, the book resolves very well. Don't underestimate the skill here. To stick the landing on a book that has the protagonist's death in the tile, that is hard.
The world building here is excellent. It is not only the details of the magic, ghosts, and medical science, but it is also the unsettling almost recognizable setting. It is almost alternative history, but not quite. And the terror builds steadily and relentlessly without sacrificing the interesting world building.
Jane is a great heroine. Her backstory and details are assembled and revealed well and her motivations and growth are interesting to watch unfold.
Like Chizmar, Starling is also an author whose books are very different but her writing draws you in: Space Body Horror, Vampire novella, and now a twist on Gothic Horror. I have read and reviewed all of these and really enjoyed each. [She has more, but this is what I have read.]

Three Words That Describe This Book: intense tension, haunted house, trust no one

Readalikes: The Upstairs House by Fine, The Little Stranger by Waters and anything by Shirley Jackson. Crimson Peak [film] is in the publisher comps. I am not familiar enough with the movie to add that to my official review, but I am adding it here for those who do like it.

This feminist retelling of the Gothic novel, a modernization which gives much more agency to the women, is a huge trend right now. That's how you hand-sell this title-- Did you like Mexican Gothic? Shirley Jackson? Then read this.

Just get it into people's hands ASAP.

Becky
Becky Spratford [MLIS] is a Readers' Advisor in Illinois specializing in serving patrons ages 13 and up. She trains library staff all over the world on how to match books with readers through the local public library. She runs the critically acclaimed RA training blog RA for All. She is under contract to provide content for EBSCO’s NoveList database and writes reviews for Booklist and a horror review column for Library Journal. Becky is a 21 year locally elected Library Trustee [still serving], a Board member for the Reaching Across Illinois Library System, and on the Executive Board of the Illinois Library Association. Known for her work with horror readers, Becky is the author of The Reader’s Advisory Guide to Horror, Third Edition [ALA Editions, 2021]. She is a proud member of the Horror Writers Association and currently serves as the Association’s Secretary and organizer of their annual Librarians’ Day. You can follow Becky on Twitter @RAforAll.