So get out there and suggest a good read to someone today. I don’t care what list or resource you use to find the suggestion, just start suggesting books.
Please remember to click here for everything you need to know about how to participate. Click here to see a database of eligible diverse titles sorted by month.

The Woman in the Library: A Novel

“Freddie is at the Boston Public Library when a murder occurs. While waiting for the police, she strikes up a conversation with others at her table. The four become friends, but could one of them be the murderer? Much misdirection and an unreliable narrator make for a tight little thriller that will have you sure you know whodunnit until you don't. For fans of The Body in the Library, Magpie Murders, and The Hunting Party.”

“What would you do if your editor demands that you deliver a finished romance novel tomorrow, but you think romance is dead? And what if he turns up as a ghost on your doorstep the next day? An unputdownable romance that is also about family and death, reconciliation and creativity, stress and the supernatural. For fans of The Love Hypothesis and Go Hex Yourself.”

Fake It Till You Bake It: A Novel

“When fashionable, privileged Jada is cut off by her parents, her NFL-team-owning grandmother suggests that she work at a cupcake shop–one that happens to be owned by player Donovan Dell, the sexy but stuck-up guy Jada insulted previously. Neither of them counted on the sweet and spicy vibes that grow between them. A frothy, fun read perfect for fans of Ten Rules for Faking It and The Dating Plan.”
—Laura Eckert, Clermont County Public Library, Milford, OH
NoveList read-alike: A Proposal They Can't Refuse by Natalie Cana

“Laurie faces a crossroads. She has just canceled a seemingly perfect wedding and flown across the country to deal with a beloved aunt's estate. Among her aunt’s things, she finds a wooden duck decoy that sends her on a journey to discover its origins, and in the process, herself. A terrific follow up to Evvie Drake Starts Over and great for fans of The Two Lives of Lydia Bird.”

“Iona is a bold woman of a certain age who navigates life without hesitation. When she breaks one of her rules, and speaks with her fellow train passengers, it leads to all sorts of wonderful connections. Iona strives to fix the lives of others, never suspecting that she might be the one in need of friendship, support, and advice. For fans of Oona Out of Order and Anxious People.”

The Lies I Tell: A Novel

“Journalist Kat befriends con artist Meg in hopes of exposing her in revenge for a past wrong. As they get close, the shifting points of view reveal layers of deception between two masterful manipulators. For fans of fast-paced thrillers in the vein of Mary Kubica and Jessica Knoll.”

The Measure: A Novel

“Imagine receiving a mysterious string that tells you exactly how long you’ll live. Now imagine everyone in the world getting their own string. This is the type of book that changes your thoughts on life and lingers for a long time. Perfect for book clubs who loved The Immortalists and The Age of Miracles.”

“Nora Hamilton is a TV writer who pens a script based on her disaster of a broken marriage. Next thing she knows, a film crew arrives at her country home with two famous actors in tow. What follows is one of the funniest, heartbreaking-ist and most endearing stories you will read. For fans of Jasmine Guilory and Emily Henry.”

The Perfect Crimes of Marian Hayes: A Novel

“Marian, Duchess of Clare, just shot her husband. (He deserved it.) The only person who can help her now is highwayman, con artist, and all-around cheerful villain, Rob Brooks. Rob and Marian have madcap escapades and hijinks as they flee London in this Georgian romance that’s absolute perfection. For readers of KJ Charles and Evie Dunmore.”

“Tracy Flick is back and better than ever. Or, at least, she WOULD be if she could just nab that job as high school principal. With wry commentary on the education scene and the politics of "having it all,” this sequel to Election will entrance Gen X readers and a whole new generation, too. For fans of Gary Shteyngart and Curtis Sittenfeld.” 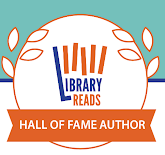 The LibraryReads Hall of Fame designation honors authors who have had multiple titles appear on the monthly LibraryReads list since 2013. When their third title places on the list via library staff votes, the author moves into our Hall of Fame.

The House Across the Lake: A Novel