During the middle of September, my local library system, RAILS, sent me on tour to both train the book club leaders of Northern IL and facilitate a book discussion with them.  The details, handouts and slides for those programs can be found here.

This post today is going to be like all of my other Book Discussion Reports [of which I have hundreds on the blog at this point] except, instead of reporting on 1 book discussion, I am going to compile the notes from all three discussions into one report. 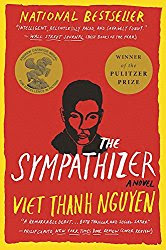 On September 13, 15, and 20, 2016 I met with library workers to discuss The Sympathizer by Viet Thanh Nguyen. From the publisher's description:

A profound, startling, and beautifully crafted debut novel, The Sympathizer is the story of a man of two minds, someone whose political beliefs clash with his individual loyalties.

It is April 1975, and Saigon is in chaos. At his villa, a general of the South Vietnamese army is drinking whiskey and, with the help of his trusted captain, drawing up a list of those who will be given passage aboard the last flights out of the country.

The general and his compatriots start a new life in Los Angeles, unaware that one among their number, the captain, is secretly observing and reporting on the group to a higher-up in the Viet Cong.

The Sympathizer is the story of this captain: a man brought up by an absent French father and a poor Vietnamese mother, a man who went to university in America, but returned to Vietnam to fight for the Communist cause.

A gripping spy novel, an astute exploration of extreme politics, and a moving love story, The Sympathizer explores a life between two worlds and examines the legacy of the Vietnam War in literature, film, and the wars we fight today. (From the publisher.)

On to the discussion notes:

Readalikes: I provided a two page list of readalikes to the participants. Here is a direct link but the text is also below:

If you enjoyed The Sympathizer you may also like…

The Orphan Master’s Son by Adam Johnson and The White Tiger by Aravind Adiga [both Fiction]
Like The Sympathizer, these award winning titles all share a strong, first person narration by a protagonist living in the “East” [North Korea and India respectively] who makes morally ambiguous decisions, yet despite his serious flaws still manages to captivate the reader. Contemplations of the true meaning of freedom also appear in all three novels.  Each is a compelling, literary fiction-psychological suspense genre blend where readers learn about a different part of the world from a new, honest, and often unsettling, point of view.

Beloved by Toni Morrison
In interviews, Nguyen has mentioned how reading this novel opened his eyes to how a hyphenate American can tell a story that is both beautiful and brutally honest about the experience of “the other” in America while still honoring and respecting the others place as an American. Nguyen has also cited Morrison’s comments that she writes for African American readers first and foremost as permission for him to write directly to a Vietnamese audience as an American writer. After reading The Sympathizer, despite their surface differences, the similarities between the underlying message of these novels is striking.

Daniel Silva’s  Gabriel Allon series beginning with The Kill Artist
If you liked the introspective spy protagonist in The Sympathizer but wished the story had more action, then this series is perfect for you. From NoveList’s series description, “Balancing action-packed thrills with nuanced portraits of volatile Middle-Eastern politics, these gripping spy thrillers follow a tough yet introspective Mossad agent-cum-art restorer as he unravels intricate international plots, leads his team on violent missions, and reflects on haunting traumas in his personal life as well as in Israeli history.”

Also, consider watching the films  Apocalypse Now and/or Platoon after reading this novel. I bet you will see them in a completely different light.

The Quiet American by Graham Greene
Complex, flawed characters are involved in espionage and war in a richly detailed historical setting -- Saigon before the departure of the French, using compelling writing and bleak atmosphere. The narrator of The Sympathizer comments directly on The Quiet American as an example of Western attitudes towards Vietnam and Asia, making this a good choice for readers interested in exploring these themes more deeply and from a historical perspective. [Fiction]

Tree of smoke by Denis Johnson
This psychological, literary novel follows an American CIA agent and a Vietnamese double-agent during the Vietnam War. It explores the tragedy, hypocrisy, and ineptitude of the American involvement in Vietnam. Like Nguen's novel,Tree of Smoke is a character-driven story, bleak in tone and rich in historic detail.  [Fiction]

Matterhorn: a novel of the Vietnam War by Karl Marlantes
Lieutenant Waino Mellas and his fellow Marines venture into the mountain jungle of Vietnam as boys and fight their way into manhood, confronting external obstacles as well as racial tension, competing ambitions, and underhanded officers. This award-winning novel excels at capturing -- like The Sympathizer -- how little divides what is good and bad within each person's nature.  [Fiction]

Vietnamerica: a Family's Journey by G. B. Tran
A memoir in graphic novel format about the author's experiences as the son of Vietnamese immigrants who fled to America during the fall of Saigon describes how he learned his tragic ancestral history and the impact of the Vietnam War on his family while visiting their homeland years later. Readers will find it an interesting, real-life complement to the fictional experiences of the General and his family in the US described in Nguyen's novel. [Nonfiction]

Embers of War: the Fall of an Empire and the Making of America's Vietnam by Fredrik Logevall


A history of the four decades leading up to the Vietnam War offers insights into how the U.S. became involved, identifying commonalities between the campaigns of French and American forces while discussing relevant political factors. This is a prize-winning history by an author recognized as an expert on the era; readers looking for a comprehensive grounding in the events that led up to the Vietnam War will find this a perfect choice. [Nonfiction]

During the discussion, more readalikes came up and even a listen alike:
Posted by Becky at 7:00 AM

Thank you! We are currently reading and will discuss The Sympathizer next week on 2.15.17. I don't know you saw that the author had a new follow-up release this week: http://www.chicagotribune.com/lifestyles/books/sc-refugees-viet-thanh-nguyen-books-0208-20170207-story.html

I did see that. And he has an essay in last week's Sunday NYT book review. Good luck with the discussion.

Thanks for documenting everyone's insights and opinions, gave me a fresh perspective and even more to think about!